Greetings from the Ethereal Plane,

We present to you our interview with Hugh McStay, author of “The Power of Hate,” which is featured in Hinnom Magazine Issue 002. 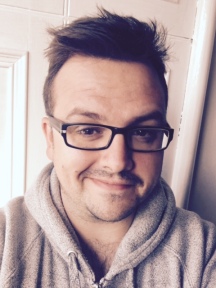 CP: Can you tell us a little bit about your story “The Power of Hate?” What inspired it and how did it come to fruition?

HM: It’s a story that had been gestating for a while to be honest. I had thought of the idea of a being or a creature that was held together purely by its own rage and need for revenge. It took me a couple of weeks to come to an understanding of what function that would serve in a story, and where that path of vengeance would lead it.

I liked the idea that its power came from an extremely emotional place, and that the emotions on the opposite end of the spectrum would be its undoing.

CP: While speaking of inspiration, what inspired you to become a writer? And what authors helped carve your path to horror?

HM: I studied to be a journalist when I was 17. I graduated but never really pursued it as a career path. I had always wanted to write for a living, but the boring day to day drudgery of writing dull copy never really appealed to me. So I worked at it privately, never writing for anything other than my own enjoyment.

I am, like any horror fan worth their salt, a fan of the works of Stephen King and Clive Barker. King’s writing style makes for such easy reading, and it belies the deep and nuanced nature of his characters. And Barker’s imagination seems to know no bounds, I am particularly fond of his Books of Blood.

CP: What are your goals and aspirations as a writer? What does the future hold for Hugh McStay?

HM: I want to publish my short stories regularly over the next couple of years. I have spent a long time just writing for me (which I think all writers should have as reason number one for writing) and I would like to be able to make a career out of it and eventually write full time. I’m currently working on my first novel, I hope to have a complete version by the beginning of 2018.

CP: Tell us something that not many readers know about you.

HM: That is a tough one! I read my first Stephen King book when I was nine years old, which with hindsight (and children of my own) I can see how inappropriate that might have been. It was The Shining, and to this day that novel has the ability to give me sleepless nights.

CP: “The Power of Hate” is an interesting story that mainly revolves around themes of revenge and redemption. Why did these themes speak to you in regards to the crafting of the story?

HM: There is an inherent sadness to tales of revenge that I find fascinating. It’s often born out of betrayal and a feeling of misplaced righteousness. Often the protagonist is on a self-destructive path where they are consumed by the darker side of their nature. People who lose themselves in their own hate, and can only be redeemed by finding their own humanity.

My main character is a man who is a disappointment to himself, who has been betrayed by the life he crafted. He is an objectively good person who hangs on to the darkness inside him, because that’s all he has left.

CP: Do you have any other works releasing soon that our readers can look forward to? If not, are you currently working on any pieces?

HM: I have sent off several pieces in the last month, so I am currently playing the waiting game as  many other writers do. I’m excited to be working hard to have my work seen by the public at large, so please keep an eye on my twitter!

CP: If you could meet and converse with any writer, living or dead, who would it be? Why?

HM: I would love to have a chat with Stephen King, which I’m sure is a common answer! His book On Writing is the greatest writing tool I have ever found. Full of great stories, incredibly helpful and simple advice and is an inspiring work.

I would love to talk to him about the world building that he does, the way that every tale he spins feels so lived in and real. And also, where he has found the energy to write (at last count) twenty billion novels . . .

CP: What is your favorite novel or work, and/or author? Why?

HM: Again, would have to be Stephen King. Of his works, I have a particular soft spot for his Dark Tower series. In terms of an individual novel, It is truly the benchmark for me in terms of what horror fiction can achieve. Terrifying, moving, funny, and insightful.

CP: What is your writing process?

HM: I write my first draft as soon as the idea is fully formed. Then, without fail, I lock it away for a fortnight. Then, horrified by how poor what I have written is, I re-write at least twice until I find a version I am happy with.

I think the key is not to sit with it too long, you tend to be overly critical and edit it to death! Putting it away after every re-write really helps me focus on what I could improve when I return with some fresh eyes.

CP: If you could give advice to new, young authors concerning the publishing world, what would it be? And why?

And believe me, that’s easier said than done. Over the last five years I have gone through peaks and troughs with my writing. It’s only when I have got into the rhythm of sitting down regularly to write that I have seen things improve.

Don’t worry about rejections: some stories might not fit what the publisher is looking for; it doesn’t mean that someone else isn’t looking for it. And be open to constructive criticism!

Life can get in the way. Holding down a full time job and having a young family, it can be difficult to find time. But find it you must.

Thank you so much for stopping by, as always. Please make sure to like and follow us on social media!